One of the most common questions asked is, who owns UK National Debt?

In the past few years, the proportion of UK government debt held by overseas investors has been about 30%.

A different, but similar, concept is external debt. This is the total amount of UK debt (both private sector and public sector) held by overseas agents.

Source: UK DMO | Blog who does the UK owe money to?

Readers Question: After the insightful post on ‘Italian Economic Decline’, I was particularly captured by the % debt to GDP line graph of the different developed countries. The one thing that really caught my eye was Japan’s huge % debt to GDP and yet their government bond yields are consistently declining. Aren’t the markets worried that Japan may default on their debt someday or is the fact that they have a lender of last resort (no fear of liquidity problems) unlike Italy and their 0% interest rates shielding them from augmenting yields?

Why Can Japan Government Debt be So High at Low-Interest rates?

A reader on twitter asked – How has government borrowing helped me recently?

I’m tempted to paraphrase as – What has borrowing ever done for me? – just so that I can make a reference to Monty Python and the Life of Brian? – And what have the Romans ever done for us? – apart from education, sewers, wine, roads, peace, law and order  … (youtube)

But, I frequently get asked it, so here’s a few more ideas.

Why do we need to be in debt at all?
Surely all the money in interest (some £50bn pa?) would be better spent on ourselves as a country?

We could reduce the amount of interest payments by raising taxes / cutting spending. But, it wouldn’t make us better off. It would just change how we finance current spending.

Also, who do those interest payments go to – primarily UK individuals/UK pension funds. You can think of it as a transfer payment to people within a country.

You could argue that it is a transfer payment from the average taxpayer to people with pension funds / city financiers – who are likely to be better off. But, more people with private pensions may benefit from government interest payments than they realise.

Interest rates are also very low, which means interest payments on government debt are quite a small percentage of GDP. (3%)

Use of private sector saving

In the great recession, there was a rapid rise in private sector saving. This was money not used, but just saved and unproductive.

If the government borrowed nothing, these resources would remain idle, aggregate demand would be lower and the recession deeper. Through government borrowing, we made use of this surplus savings and helped to stabilise the economy. (recession not as deep)

Read moreWhat has borrowing ever done for me?

There are a raft of different methods of calculating government debt. It can be a little bewildering (even for an economics teacher!). I have tried to define the key terms in a simple format and also a more detailed and precise way. This only focuses on the UK.

US Federal Deficit as % of GDP

Debts Not Related to Government Debt

What is the UK’s debt burden?

Firstly, there are different types of debt to consider

Debt  burden as % of income

UK government borrowing fell to record levels in the early 1990s, but since the financial crisis, national debt as a % of GDP has increased to 78% of GDP (2015).

Debt interest payments as % of GDP

Another important consideration is how significant are debt interest payments.

With low interest rates, the cost of servicing the UK government debt is lower than we might expect. Many economists suggest that when interest rates are low, the government should take advantage and borrow to finance investment.

The amount spent on debt interest payments is important for understanding the ‘debt burden’ If you take out a mortgage, the crucial thing is not the total amount outstanding, but the percentage of your income that is spent on mortgage monthly payments.

Who is the UK debt burden owed to?

Another important consideration is who does the UK government borrow from?

The majority of UK public sector debt is owned by the UK private sector / Bank of England.

In addition to government debt it is also important to look at private sector debt. In particular household debt / company debt. For example, at the start of the recession, household debt fell because householders sought to increase savings and pay off their debts, due to low confidence. In this case the government borrowing is partly offsetting the rise in private sector saving. 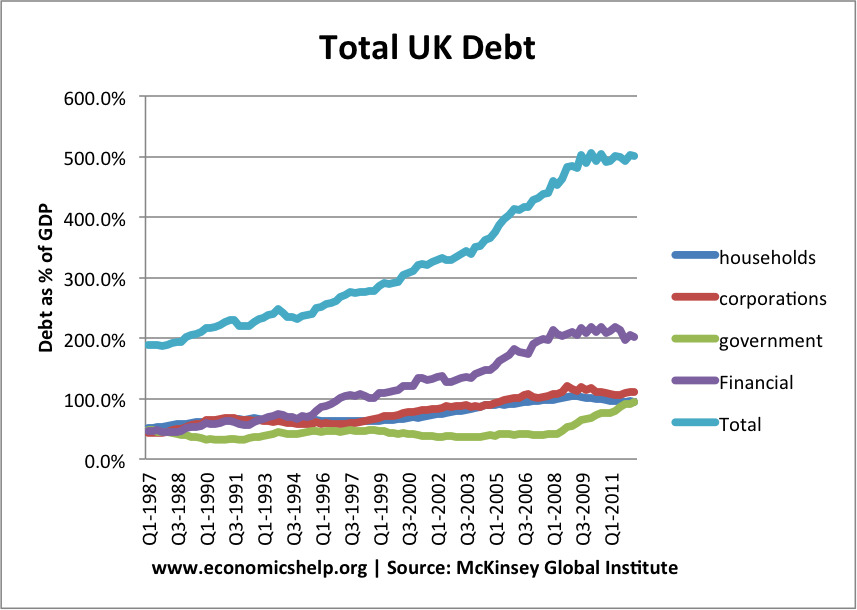 Readers Question. Just saw a video called ‘How to waste £375 billion? (The Failure of Quantitative Easing)’ by Positive Money. I’ve recently started reading your blog and find your posts very informative. I wonder what you make of the ideas in this video and of this group in particular?

(I haven’t seen the video. For some reason I never like watching videos only reading articles.)

A simple comparison is to compare the UK and US (who have both pursued quantitative easing) with the Eurozone (which hasn’t). In the past couple of years, the economic recovery has been stronger in the US and UK, the Eurozone is in danger of a double dip (or triple dip) recession. The Eurozone is heading towards a dangerous period of deflation. The UK and US have at least a better inflation rate.

Therefore, I wouldn’t say we wasted £375 billion. Firstly, ‘wasting’ implies an opportunity cost – for example, finding it from higher taxes or lower spending. It was entirely created. For all its faults and limitations, the quantitative easing we pursued was better than nothing – especially given the degree of fiscal tightening pursued since 2010.

Perhaps a better description of UK quantitative easing is a wasted opportunity. True, we avoided some deflationary effects, but there are reasons to be disappointed and perhaps it could have been better.

Banks largely used the newly created money to make a profit from selling bonds to the Bank of England and improve their balance sheets; because of the recession, little of this extra money fed through into the real economy through higher bank lending (see: M4 lending stats). The side effect was some banks and the bond market did very and interest rates are at very low rates. True, low rates are part of the aim behind Quantitative easing, but low interest rates are of limited benefit, if firms are unable / unwilling to borrow and make use of cheap borrowing.

Who benefited from quantitative easing?

Would a better form of quantitative easing have been to print a smaller amount of money, but directly use this to finance government budget deficit, and / or fund public sector investment?

Some argue this would have directly led to higher demand and a stronger economy.

Readers Question: You have partially explained the answer to my question in your reply to my other question, “What will we do when we can’t pay back the money owing to the government bond holders when they reach the end if their term”. While I appreciate the convenient use of the debt to GDP ratio I feel that it tends to sidestep the truth about the remaining debt. This is almost like the government using the reduction in the deficit rather than the reality of remaining, possibly increasing debt.

For some reason, the first thing that comes into my mind is the famous quote from Dr Strangelove – “how I learned to stop worrying and love the bomb (debt)”

I guess we can blame Charles Dickens and Wilkins Micawber from David Copperfield.

No matter how much you talk about government debt, people won’t feel comfortable until we have a zero budget deficit and zero government debt. –  (even though, I don’t think any modern economy has ever had such a situation – nor would one be particularly desirable.) Many issues are addressed here: The political appeal of austerity.

What does debt cost? 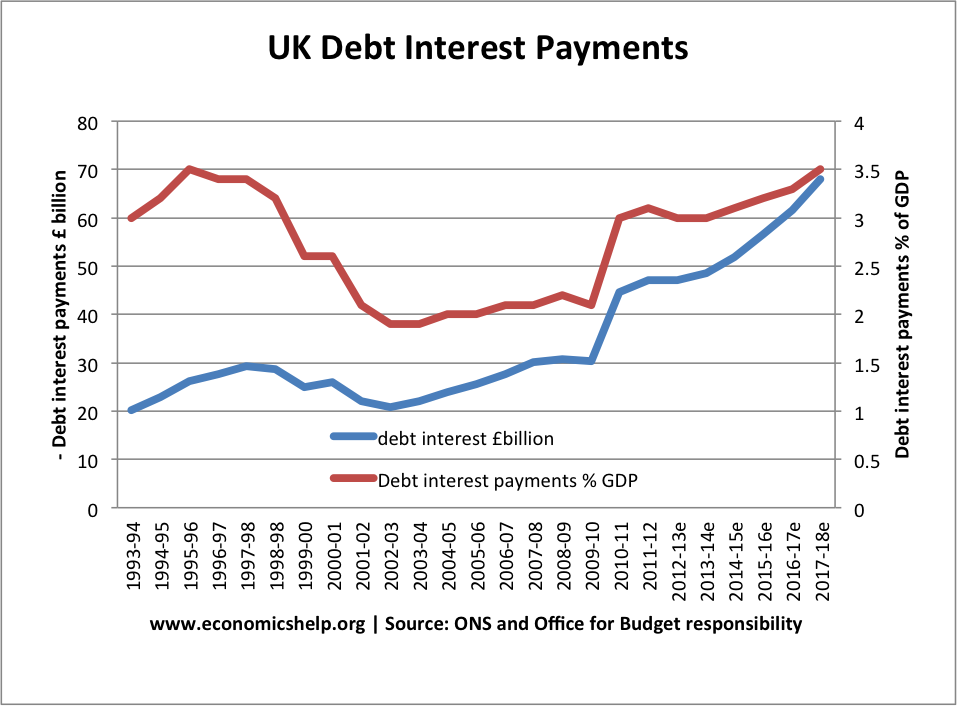 The cost of servicing UK debt has risen in the past few years, due to rise in debt. But, by historical standards, it is still quite low and certainly quite manageable. More on Cost of borrowing

The German economy has been one of the world’s strongest economies in the post-war period. There are many aspects of the German economy which deserve praise and emulation – not least strong productivity growth, a booming export sector and prolonged low inflationary growth. In the post-war period Germany has played an important role in promoting economic stability and prosperity within Europe.

But, in recent years, the German economy has seen several cracks appear and German economic thinking is now causing a major drag on Eurozone economic growth and prosperity.

The false goal of a balanced budget

An very important issue in German politics is the desirability of seeing a balanced budget (government spending = government tax revenue). Many German finance ministers have made balancing the budget their primary economic objective. In the UK and US, we see that austerity has a strong political appeal – but in Germany the appeal of ‘responsibility’ and avoiding debt is perhaps even greater. A German friend told me that there is a certain guilt attached to the idea of holding on to debt. (though this guilt is especially felt with government debt – mortgages and business loans are somehow different)

On the objective of reducing budget deficits Germany has been successful. It is also keen to enforce EU rules and the idea of encouraging a balanced budget for its struggling European neighbours.

Angela Merkel recently stated to the EU Parliament, that EU rules must be met:

“All, and I stress again all, member states must respect in full the rules of the strengthened stability and growth pact,” she said. “These rules must be applied credibly to all member states — only then can the pact fulfill as a central anchor for stability and above all for confidence in the eurozone.” (US Today)

Although, Merkel did not name France, the implication was that France must do more to meet the EU Stability and growth pact.

Why is a balanced budget a false goal?

A successful business does not have its objective to borrow nothing. A successful business knows that it needs to invest to make progress and retain its prosperity. Years of cutting government spending has meant that Germany has cut back substantially on public sector investment. There are widespread reports that Germany has a lack of investment in roads, bridges and other forms of transport. There is a fear that important infrastructure, such as roads and bridges are reaching the end of their 70 year cycle, but there is no money to successfully replace them. The economic problem is growing congestion, time wasted and damage to the long term productive capacity of the economy. The Guardian notes

Its (German) investment rate in 2013 was the fourth lowest in the EU; only Austria, Spain and Portugal spent less. Fratzscher, who is head of the German Institute for Economic Research, calculates there is an “investment gap” of €80bn (£63bn).

The Economist reports that German public sector investment is —a paltry 1.6% of GDP— one of lowest in Europe and has fallen since 2009.